The Torrington & District Agricultural Society is a non-profit organization that was created in 1974 with the dream to build a new arena and curling rink in Torrington. The dream took shape as the arena was built in 1978 with elements being finished into the mid 80’s.  Since that time the Torrington & District Agricultural Society has been operating and maintaining the Ron Gorr Memorial Arena.

The Torrington & District Agricultural Society is always looking for new members and volunteers. If you are interested in becoming involved, please contact us today! 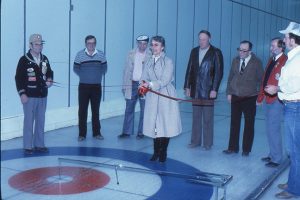 In February 13, 1974 the first organized meeting was held under the leadership of Art Bauer as temporary president and Gordon Schafer as temporary secretary. The project of the Society was to build a new arena and curling rink. The objectives were to:

Art Bauer sent a letter to the Honourable Hugh Horner applying for “Certificate of the Charter” of the Agricultural Society to form our registered society.

On August 7, 1974 the first elected officers of the Torrington and District Agricultural Society were president Walter Landymore, Vice President Ed Bauer, Second Vice President Art Bauer, Secretary Gordon Schafer, Treasurer Nick Dronyk. Promotional grants at the time were available for the betterment of communities who had a will to help themselves. Members planned to put the building on its present site as there was natural gas and plumbing and they would not have to buy the land.

October 31, 1975 the society ordered a steel building from Behlen Wickes, with a down payment of $13,116, the balance of $74,330 to be paid on delivery.  They were to start setting up the building in February 1976 weather permitting.

January 6, 1976 the building delivery was postponed until May 31, 1976 due to building standards.

January 18, 1978 finally a truckload of bolts and connectors arrived.  The total weight of this building is 170,000 pounds.  The total cost of the building was $87,446 which included framing for the second floor.

August 9-20, 1978 4000 yards of gravel was hauled by volunteers using their personal farm trucks for the base of the building.

December 1978 erection of the building, contracted to Dick Staples, began under the supervision of Ron Gorr and various community volunteer helpers. Once this phase was completed boards were put up for hockey ice.

August 25, 1980 cement was poured for the lobby area by Miereu Brothers and volunteers.  Shortly after block laying closed in the dressing rooms, bathrooms, art and craft room, curling area and lobby. This work was contracted out to Robin Bonner.

During the fall of 1980 volunteers laid plywood down for the upstairs and to keep the heat inside.

Over the years work has continued to make this facility what it is today. We can enjoy this debt free building due to the volunteer spirit of many people.

“Volunteers do not necessarily have the time; they just have the heart” – Elizabeth Andrew

We would like to thank all the people who have dedicated countless hours to the Torrington & District Agricultural Society and ensuring the ongoing success of the Ron Gorr Memorial Arena in Torrington. Without these dedicated volunteers the arena would not exist in our community today.

Listed below are executive members who have held key roles in our organization over the years.